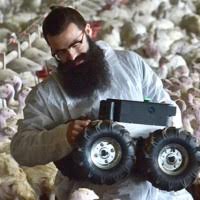 The idea for Poultry Patrol hatched at Digi Labs, a local tech incubator in Wayzata, Minnesota. It was initially a side project, but gained momentum after Jack Kilian, then a member of The Wild Goose Chaser team, pitched the Poultry Patrol idea at Red Wing Ignite’s Ag Tech Challenge. Poultry Patrol won the first place prize which was enough to start building a first prototype which has logged over 5 months in the turkey barn to date. Red Wing Ignite also connected Poultry Patrol with innovative turkey farmers in the region and the Minnesota Turkey Growers Association who have been extremely supportive partners throughout the development process by offering testing sites and invaluable product feedback. Since, Poultry Patrol has been a finalist in an international grant that connected Poultry to and received letters of support from many of the largest companies in the poultry industry like Cargill, Jennie-O, and the European PHW Grupe.

Poultry Patrol has the benefit of collaborating with other tech companies under the Digi labs umbrella such as: Rover Robotics, The Wild Goose Chaser, and Blue Robotics. For example, prior to Poultry Patrol, many of the team members worked on a robot to identify and deter geese in partnership with (https://roverrobotics.com/), leveraging their outdoor, waterproof robotic platform. This autonomous robot utilized image-based machine learning to identify geese from an onboard RGB camera, computer vision to autonomously dock and recharge, and customizable sensor payloads. Furthermore, the robot relies on a field-validated tactical police robot base with thousands of tactical deployments (https://robotex.com/customers/). Our partnerships and collaborations at Digi Labs run deep and Poultry Patrol has a significant competitive advantage in this location. Poultry Patrol is still pre-revenue and expects to require additional funding to finish a working prototype.